A VPN provides a safe way for you to connect to the internet. The main task of a VPN is to provide security, among various other things. A VPN acts as an intermediary between your ISP and the internet. Without a VPN, the internet is connected through your ISP; however, once you add a VPN – it goes through your VPN server. This server is selected by the user based on the preferences. However, once you connect a VPN, it changes your IP address and encrypts the data to codes that are not easily decoded. The information is jumbled up together so whatever activity you perform under the connection of a VPN, it is unreadable to your ISP or any other party. Since your data is private and confidential, it is safer to use the internet through a VPN rather than without it. In this article, we will look into the best VPN for security and the number of different protocols available for these VPNs.

What is a VPN Protocol?

VPN protocols are a set of mixed protocols and standards of encryption. Most VPNs come with some sort of protocol encryptions that are necessary for making your data safe. When a protocol is enabled, it is authorized to handle the data coming up, in a certain way. The procedure and methods of handling the data are different for different protocols which are why having a thorough knowledge of these protocols can come in handy while choosing which one suits you the best. Some of the protocols handle the data by prioritizing the performance rather than security. Others focus on the security aspect more rather than the performance one. Here are the different VPN protocols. 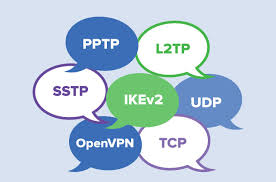 Introduced in the late 1990s, PPPT is among the oldest protocols. However, the fact that it is still widely used is enough to tell you that it works. It is quite fast and contains universal support; however, it has many drawbacks that you need to know.

PPTP is a tunneling protocol that works through encapsulated data packets. To encrypt the data for the connection, Point-to-Point (PPP) is used. This protocol is supported by Windows, Mac, and Linux.

When PPTP was developed it had no specific encryption specified. Now, when we think about PPTP, it is the one that Microsoft introduced and it was shipped by it along with Windows. This version is mostly used these days and combines various technologies commonly referred to as Windows PPTP stack, making it powerful in terms of encryption.

If you are using a free mobile VPN, chances are that your connection is not being encrypted at all. PPTP is fine if you want to access other country servers on small streaming websites. However, for streaming giants like Netflix and Hulu, you need a VPN which allows you better protocol options. Many good paid VPNs provide multiple options when it comes to selecting a VPN protocol.

PPTP is still pretty good in terms of speed as compared to the modern strongly encrypted protocols. The speed advantage is pretty good with PPTP especially if you are looking to stream; however, in terms of security, it lacks in many aspects. Nevertheless, it is still strong enough to keep a beginner hacker out. If you are looking to avoid governments or other professional hackers, PPTP might not be for you.

If you want to unblock streaming websites it might be useless in terms of geo-unblocking the contents. There is another alternative to this, you can opt for Smart DNS or Proxy which is better for streaming intentions since it is guaranteed to unblock the content you want to stream.

L2TP or Layer 2 Tunneling Protocol is best used by combining another VPN security protocol such as IPSec. This process makes the VPN connection highly secure. IPsec or simply Internet Protocol Security is a security protocol suite. It contains the technology that connects your computer and the VPN server. It also allows the encryption of data to data packets which are encrypted with strong levels of security. Because of this, the L2TP/IPsec is pretty much unbreakable.

L2TP is surprisingly pretty old – similar to PPTP; however, it doesn’t have many weaknesses and therefore it has not been cracked yet. It also supports universal platforms such as Windows, Mac, and Linux. Having said that, the only reason why it is avoided these days is that it gets blocked easily. If you reside in countries where using VPN is illegal, it is easier to block L2TP. Countries like China and Russia, block such protocols right away because it uses a handful of network ports if we close it all the VPN just stops working. In terms of the number of standards, the L2TP/IPsec has two encryption standards. The first is 3DES, which has become obsolete due to many security drawbacks. The second one is a 256-bit AES standard which is the latest type of encryption and almost impossible to crack.

Normally, this kind of protocol is best for an average user. People who want just a good level of security without going into many complications. On top of being unbreakable, this protocol will also provide decent performance.

SSL and TLS are used to create a VPN connection where some specific applications are restricted and not the complete network. In such a protocol, the web browser works as a client. Service providers often use this protocol to restrict some specific websites or applications. The URLs starting with https are an indication of SSL connections.

This protocol is one that doesn’t have the risk of being blocked. The biggest drawback of SSTP is that it works only on Windows. Therefore, if you are looking to use a VPN that is not Windows-based, it is not worth considering. Windows Vista Service Pack 1 introduced us to SSTP which is a proprietary protocol completely owned by Microsoft. This can also be a concern for security since the internal workings of the standard are closed off.

There is a good chance that the US government has access to the backdoor of this protocol which is why it raises a lot of questions. However, this is just a theory with no evidence to support the claims. SSTP introduced SSL 3.0 encryption standard back in 2014 which now has become an older standard.

One of the biggest advantages that SSTP has, is the ability to defeat VPN blocking. This is possible because the protocol uses TCP 443 (common port). The best part is, Windows is widely used in all parts of the world and you can use the SSTP protocol to get around VPN blocking quite easily.

In case, you are not bothered by the sole proprietary – you can use this protocol to unblock websites and surf the web freely. This is a fairly user-friendly protocol and doesn’t require any complicated knowledge of the protocol. In any case, there is an alternative – if you are skeptical about SSTP. Another protocol that carries the same advantages as SSTP is OpenVPN. The plus side is that it doesn’t carry the baggage of Microsoft’s only usage.

OpenVPN protocol is used for open source VPN which creates Point-to-Point and Site-to-Site connections. It is a custom security protocol that uses SSL/TLS for key exchange. It is without a doubt the best thing to ever happen in the world of VPNs. This protocol uses OpenSSL and TSL with the addition of other minor technologies. Unlike many other protocols, OpenVPN has no especially built-in support for a specific platform that has its merits and demerits. The fact that anyone can use OpenVPN through a third-party VPN client is also good and bad at the same time.

However, using OpenVPN is not easy for any random company. Only the VPN companies that are premium in terms of resources and investment can put money into making a VPN client that runs on OpenVPN. Since the companies are developing the client that supports this protocol, it is their choice to select the compatibility for different devices. For example, if the company only makes the VPN client Mac supported, Android users won’t be able to use it no matter what. Having said that, it is easily available on many clients for different platforms so you are not completely out of luck! 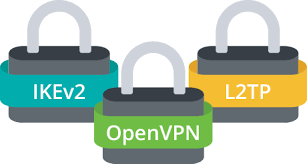 Furthermore, the risk factor for this protocol is highest since you need to rely on two different parties to keep your data safe. The first part is your VPN provider and the second one is the company that made the VPN client. The back-door risks are too high for OpenVPN.

OpenVPN is best used on different UDP ports however, it can be used with a TCP port 443. This port allows the usage of HTTPS traffic from websites and can easily avoid any VPN blocking.

This protocol also has access to many technologies for different encryptions because it uses the OpenSSL library. OpenVPN is best for every level of internet users as it is the most flexible, has great performance and provides security that no other protocol can. This is why you should always prefer this protocol before moving on to other available options.

Just like L2TP/IPsec, the IKEv2/IPsec is a mixture of different protocols tunneled together with the security technology of IPsec. This protocol is another one which is not open for all platform because it was developed by Microsoft in collaboration with Cisco – the networking giant. Developed in the mid-2000s, IKE is the latest technology in the world of protocols that is yet to reach its full potential in terms of support. IKEv2 came as the new version of this protocol. The good thing about being a Blackberry user is that this protocol is supported by Blackberry’s technology.

However, it still works on other platforms as well since Blackberry has lost its market completely. The support for iOS, for instance, also exists for this protocol. The development of this protocol was based on the latest technology which is why it won’t let the VPN tunnel drop even if you switch your mobile internet to a Wi-Fi. This is possible due to the IKE protocol supporting the multi-homing technology which means that changes in networks are handled pretty well when using this protocol.

Since it is the latest technology we got, it’s without a doubt, the fastest VPN protocol available in the market. The reason for the protocol not being widely accepted is the ownership of giants like Cisco and Microsoft. It works in the best interests of organizations however, individuals cannot trust the protocol because the company might have given backdoor access to government organizations for them to spy on users. All things considered, despite its fast speed, OpenVPN is still preferable because it is much less risky than the IKEv2/IPsec.

Another aspect of security is the encryption bits provided by the VPNs. Free VPNs have limited advantages and the security is poorer as compared to paid versions. If you are paying for a VPN, make sure the VPN provides you with 256-bit encryption rather than 126-bit encryption. 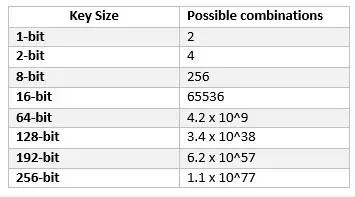 All in all, the basic reason for using a VPN is for security and one should never compromise on that. This guide provided the basics about the security aspects in a VPN. I hope this information proves to be useful in finding the best VPN for security and that you continue to surf the web freely.